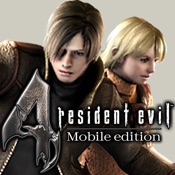 Thank you for your support of Resident Evil 4: PLATINUM. The team has done its best to provide our users with the most enjoyable play experience possible. To avoid confusion in the marketplace and to make room for other titles in the series we will be removing Resident Evil 4: PLATINUM from the App Store on August 24th. The team is working hard on future titles that will offer new features as well as fully support the latest iOS devices and operating systems.

Please note that application is not compatible with iOS 8 or later OS, if you upgrade the OS version or changed to new model, it may not work properly.
For operating support (compatible model / OS), please see 【Compatible support】 for details.

Our deepest thanks to everyone that played and enjoyed Resident Evil 4: PLATINUM.


Important Notice:
Functionality is not guaranteed on devices that are updated to iOS 8.

Play Resident Evil 4 Platinum, the game that changed survival horror forever!
Experience one of the most thrilling chapters of the Resident saga in an all new way. Engage in running gun fights against crowds of enemies utilizing Resident Evil 4’s intuitive tap interface. Face an enemy quicker, smarter and scarier than any zombie and put your skills to the ultimate test.

It has been six years since the destruction of Raccoon City. Leon S. Kennedy, formerly Raccoon City Police Department’s idealistic rookie cop, is now a U.S. agent with a top-secret mission to rescue Ashley Graham, the President’s daughter. Leon begins his investigation in an undisclosed Spanish-speaking village in Europe, where he encounters a horde of unruly villagers who pledge their lives to Los Illuminados, the cult that perpetrated Ashley’s kidnapping. As Leon encounters unimaginable horrors, he must find out who or what is behind everything.

•3rd person perspective camera for a panoramic view of the action.
•Blast enemies apart with laser precision. Location based damage means where you aim is what you hit.
•Shake the iPhone/iPod Touch to reload.
•Context sensitive controls pop up as need allowing you to perform complex actions with a tap of the button. Climb ladders and interact with your environment with a press of an icon.
•Play through “Story Mode” to unlock ”Mercenary Mode” missions, a separate game mode with pre-set goals, weapons and conditions.
•An all-new “Coin Shoot” shooting gallery mode where the where the goal is to destroy as many blue coins as possible within the time limit.
•A total of five difficulty levels: “Beginner”, ”Normal”, ”Professional”, ”Hell” and “Extreme”
•New DLC that enhances the gameplay with special cheat modes.
==============